Why The Redskins are a Terrible Team 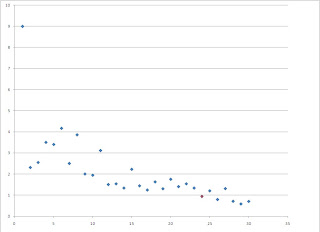 I started doing some research on Quarterbacks after watching this weekends Playoff games. I noticed that Jay Cutler (as i have always noticed) is actually a terrible Quarterback. His Touchdown to Interception ratio (TDI) this season was a mere 1.43. The League average is 2.03 (but it a bit skewed thanks to Tom Brady who scored a 9). However, more onto the point of this post, is to why the Redskins are actually a bad organization.
As a current DC Resident, I tend to catch a lot of the Redskins games on the TV. Next season i might watch Reruns of the Antione Dodgson reality show than watch the games, because the redskins are actually that bad. Despite being the third largest Market in the world, the Redskins still continue to miss the playoffs and finish last in the league. But again, enough of my complaining and let me spit some statistics at you.
Donovan McNabb, he was the one to blame right, he was so terrible that is why Philadelphia got rid of him. Well, Donovan McNabb became worse once becoming a redskin. His TDI while playing for the Eagles was 2.31, and even in his so said "Decline" his TDI was still 2.00! Now ready for the hard facts, since playing for the Redskins, McNabbs TDI is .933. Thats right fokes, that means he threw more interceptions than touchdowns, a feat that only 6 Quarterbacks have accomplished this year, a statistics normally granted to rookies, not an 11 year Veteran Pro Bowler. Sure Donovan caused some of this, with his aging legs and failure to run the two minute offense, but that does not explain such a large drop.
Rex Grossman, sure he must have been the savor right? Nope, 7 touchdowns, 4 interceptions, not a very high number especially with the small sample size.
Kyle Shanahan, the coordinator must have caused all of this, right? Sad to say, no! While coaching for the Houstin Texans, a Shanahan quarterback never threw a TDI less than 2.
So then, whats wrong? This I dont know exactly, but i assume it stems from the top down. It looks like the Redskins have the typically European Soccer flaw, buy big, pay too much and dont fix the small things.
Lets think this one out. Sure some quarterbacks are just terrible (as in Jay Cutlers Case), however others just make bad decisions when they are rushed. The Redskins are in the bottom quarter of the league for time allowed to throw the ball. Thus McNabb (and Grossman) are forced to throw the ball to their receivers with less time to think about where go. This seems to be a trend with the Redskins Quarterbacks, over the last 3 seasons (since Mark Brunell left), the Redskins TDI is 1.1 , League average 2.1.
My suggestion - An offensive line, surprisingly cheap, the Average salary of the Patriots offensive line (the best pass protection and run protection in the league) is a mere 2.3 million dollars per year, thats about 4 million less than McNabb's. Now I understand you cant build an O-line with his salary but its a start. Protect the quarterback so he can throw some touchdowns, and let you win the game.
(By Vick, McNabbs's replacement for the eagles threw a 3.5 TDI).
See chart below, red dot is McNabb according to this year. That really high point is Tom Brady.
Posted by Unknown at 8:07 AM