Fulham - Winning on the Cheap

Money - It is colourful, and to most sports fans it helps you win, right?

I have a problem with this, mainly because football teams spend way too much on players that are just average. However, this article is about teams as a whole, and not for individual players (quite yet anyway).

The big four teams spend money, and thus they win. Although I would love to rebuke this, I honestly cant.

Quick Facts
- Since the Premier League started in 1992 only 4 teams have won the League, only one of them was not a big four team [Blackburn Rovers 1993].

- Manchester United has won it more than any team, 11 times actually.

By this point, I'm assuming most of you just figured that this post was a waste. But if looking at the results meant anything, we wouldn't need in depth statistics. The thing is that a team can still be great even though they havent overspent for players. A great example of this is Fulham and Everton.
Fulham - an American favourite, because well it has a lot of Americans compared to other Premier teams, and by a lot of course i mean more than zero. Fulham actually has two Americans (Dempsey and Johnson). Fulham reached the number six position in the 2008 - 2009 season. And for those non-dieheart soccer fans, that means they were able to qualify for the Europa Cup (Its the JV European soccer cup, but still honourable). How much money did they spend to do this? A whopping £46.2 million. The team finishing ahead of them, Aston Villa spent nearly double that with £70 mill, and the team below them, West Ham Unite spent the same amount. How did a team with such little money produce so much. The answer, hidden talent. Fulham doesn't spend money on high market players. Why? There are two reasons, one is that they really cant afford it. They are the smallest team in their market, compared to Chelsea, Arsenal and Tottenhem. The other reason is logic! Teams that pay for Rooney, or Ronaldo pay a premium. Granted that premium wins League Cups, but the pay off is at a really high cost.
Quick Facts about Fulham
- Never won the Premier League
- Never won the F.A. Cup (came runner up once)
- Came Runner-up in the Europa 2010
One of them is not like the other? Thats right, they came Runner-Up to the second most important cup in Europe for a non national team. How much money did they spend, oh thats correct 46.2 British sterling.
Fulham is like Eating at Fogo de Chao of $10. Its like buying a New Car at a used price. The amount of money they spend is in the bottom half of the league, but they finish in the top half. What Fulham is a demonstration that money wins Championships, but teams win Cups. Now for most that makes no sense. But it steams from a general philosophy of this blog, and sports in General. Teams with a lot of money tend to pay a lot for quick fixes, and they can improve their team in the middle of the season. Teams with a little bit of money learn to play with what they have, and are willing to take a Draw if it means they will advance in the tables.
Below are graphs that pseudo make this point. The red points are the big four, the orange piece is Fulham. Now places 5,6,7 all go to the Europa, so see how those spots are pretty much up for grabs, and money doesn't necessarily mean you will get those spots. 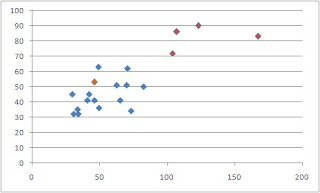 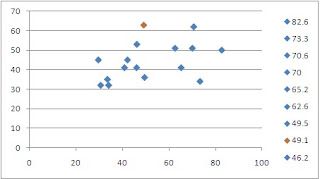