The Cost Benefit Analysis of Fighting a Ticket

If you ever visit NYC, there is a little hidden surprise when you take the six train.


A passenger can remain on the train as it turns around in order to view a stop that has not been in operation since 1954. The old ‘City Hall’ stop is a huge hit amongst tourists, but here is the problem: the turnaround is debatably legal. Despite many signs, blog posts, news reports and people telling me that it is legal, a friend and I recently received tickets for making this journey. The tickets were $50 each, and I was really upset because it is in fact not illegal to take this journey. I fought the case in the Transit Adjudication Bureau (TAB) court and you guessed it, I lost! This post isn’t about whether riding the six train around the turnaround is legal or not (since we know it is legal), but whether the cost of fighting a ticket is worth your time and money.

Let’s assume you, like me, think you are going to win this ticket. You are so sure, that the probability of winning the ticket is I P(Winning) = 1. Winning in this case means you do not have to pay the ticket, so your total fine cost = 0. However, you do have to sit in the misery (and boy do I mean misery), of the TAB offices for three hours while you dispute your case.

So EVEN if you know you are going to win, it is still going to cost you:

If you wanted your loss to be less than the cost of your ticket, you could solve the equation and your hourly rate would need to be less that $16 just to fight the ticket knowing you are going to win.

But what if you don’t, then how much would need to make? 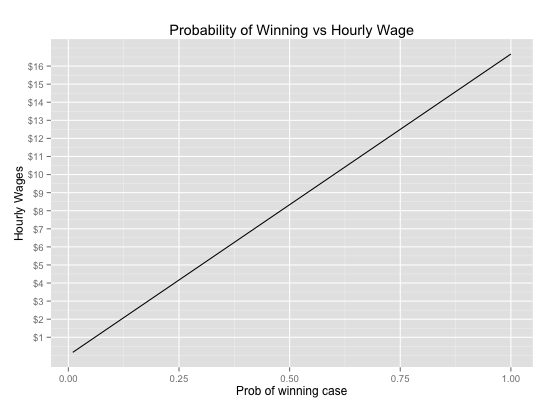 How to read this graph: it is only beneficial if your salary is below that black line at that probability. So if you are 75% sure you are going to win the case, your hourly rate would need to be less than $12.

If you are say 50% sure and make minimum wage, it is not worth your time. Of course, I’m assuming you would be working from 9-3 (the only hours of operation for TAB), and that you are using your Paid Time Off as a factor.

In a strictly cost-benefit analysis, the cost of fighting a ticket is rarely worth it. So if you are a rational human being, just pay the ticket and move on. But if you want to prove a point to the system (like I did), then go ahead and fight it. Right?

Freedom and Democracy Will Prevail

When I fought the ticket I knew I was going to ‘lose’ money (as in time), but what is the cost of Justice and knowing that the court system got it right? I mean sure, the colonists threw a lot of tea in the ocean that day, but that tea represented the price of freedom and democracy, and that really does not have a price. 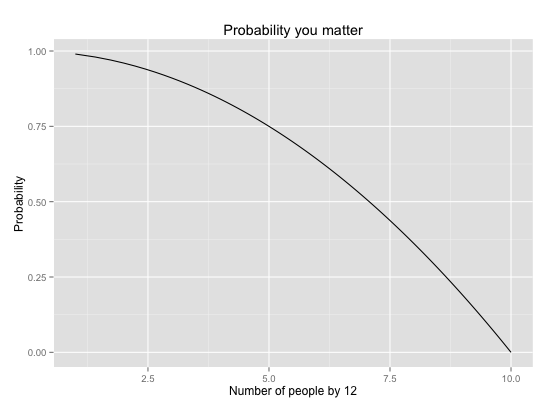 The sad part is, the TAB court system was not accepting of these ‘point-makers’ or freedom fighters. The room holds about 250 people, and it was packed. It gave me the sense that the judges do not really care about the cases: they are simply doing their jobs. They are only safety nets so that you don’t sue the TAB for being unconstitutional. They have this system in place because they have to, not because they are trying to change the world. Sadly, when you fight a ticket, you are just one person in a sea of humans. The time within the office is very formal. Though you are attempting to fight your case as an injustice, you are treated as if you are begging them to not fine you.

Sometimes We Do Win

Occasionally people decide to hop over subway turnstiles in order to avoid paying a fare. In NYC you do not need a card to exit the system, only to enter it. Some people know that it is actually smarter to risk a ticket than to pay the fare. The maximum ticket a TAB officer can give is $100 - normally the penalty for jumping the turnstile. The cost of a ride is $2.50, so again the simple math is

As long as you only get caught once every 40 times, it is actually smarter for you to jump the gate. That means if you get caught about once a month, it may be smarter to risk it and jump the turnstile and not pay the MTA machine. (Can you tell I’m bitter yet?)

Why The MTA SHOULD Ticket

The MTA almost surely has a cost benefit to this: what is the amount of tickets they can issue before the government gets involved? If the MTA keeps their ticket processing capacity the same, but issues more tickets, it means less people would be willing to wait longer and longer hours at TAB just to fight a $50-$100 ticket.

The processing time per judge would likely remain the same, but if the number of tickets issued increases, so do the hours of wait time. The graph above is based off my single sample of 3 hours, but what if that time went up to 4 hours? That would mean even if I was 100% sure I would win, it would only be worth my time if I made less than $12.50 per hour. So the MTA should increase the number of tickets they issue, thus increasing the hours to wait at TAB, and then decreasing the probability someone will fight a ticket.

This is a fine line though, because if the MTA sets the ticket-issuing number too high, the government (hopefully) would come in and regulate the system by enforcing a swifter trial or by making the ticketing rules stricter and thus decreasing the number of tickets issued.

If you ever get a ticket, just pay it. Or at the very least, fight the ticket and blog about it. Maybe I actually got something out the ticket (which I’m finally going to pay). I have a story to tell at bars, coffee shops, and most importantly, on my blog. This post is pretty cynical and critical of the MTA, which it naturally should be. I actually don’t mind the subway too much. Sure it smells like pee 90% of the time. It also manages to remain 110 degrees under ground despite it only being 60 degrees outside. Sure there are something like 113 track fires per year, but running the MTA is not easy, so I’ll be kinder next time I take that six train around.
Posted by Unknown at 8:32 AM 3 comments: