Money pays the bills, thats why everyone wants it. Whether it is a 50/50 split, or a debate over actual revenue, the lockout has made ESPN the sports industry very upset. I can say personally that I am upset, because I am forced to do college "amateur" statistics instead. I can only imagine how bad Kyrie Irving feels after leaving Duke to go sit on the sidelines while this debate is played out.Sports fans now huddle around their TV hoping that the owners and players come together and finally realize there is no I in team, [of course unless you are Lebron James]. Below I have a few comments on the Lockout and what I think we should do instead of this "66 game season", because that's just silly, for everyone involved.

Lebron James | Success of the lockout
The lockout helped someone, and that is Lebron James. He came out of this twitter battle looking like a little kid who just wants to play the games. It took a lot of the negative attention away from him and put it on the  League and [all of] the players. He really hasn't lost any fitness, and its tough when you have the build of the best player in (really recent) NBA history. He has miles to go before becoming "a statue outside my stadium" legend. Think about it though, the last year and half in the NBA was about Lebron James taking his talents outside of Cleveland to Miamia to team up with these Superstars. Then when the team got on the court they had the weight of the world on them. I think a majority of sports fans are willing to drop this talk if they bring back the NBA, of course if it actually ever does come back.

Also looking at his stats, it looks like he could have used the break. This past year (as i predicted earlier in the blog) was a statistical nightmare for Lebron, he averaged less stats per minute in every category; we would have to go back to the 2005/2006 season to match these terrible numbers. Blame the Miami nightlife, the new team or a pending lockout, but Lebron fell in the numbers, so the year off could really help his Career.

The NHL/MLS Fans go wild in excitement
The lockout forced fans to take their talents elsewhere, and for some it was to the MLS, and for others the NHL. At 9pm a bar has to put on a game, no one likes to watch infomercials at a bar, that's why we drink at home! Sure the MLS caused some controversy when their playoff system created some unjust wins. But the story is, the MLS gained some reputation this past season. Although the MLS Cup final wasn't the highest attended game in history (that was in 2002 where 61,000 people attended the match), it was a large step. More games were on ESPN this year than any other previous seasons. The NBA would have taken a lot of the MLS post-season games away; no NBA more MLS games.

The NHL can finally make it on ESPN. Granted it is not until the half-way mark, but it still sneaks its way in there. And the NHL is grabbing  all the NBA fans that are just looking for a sport Monday-Friday.

The Solution.
A 66ish game season is a terrible idea. Never rush a team, never rush a player, that is how injuries occur. What I think should happen is kinda like a video game. Lets redo the draft, but with all the players. The worst team from last year gets the first pick, and gets that player for the year. They play a 50 game fake season that really is just practice. My Example would have Minnesota getting Lebron James, and then the other teams would follow. This is a redistribution of wealth approach. Let these so called "poorer" teams get a chance to drive that luxury car they always wanted to. I mean even when the draft these good players they decide to go to Europe (i.e Ricky Rubio). Have the season played out, with these forced misfits and watch the NBA grow from what it use to be. I think it would add some excitement to the league, because it wouldn't guarantee the Lakers a playoff spot and Cleveland might make the playoffs again (::sigh::).

So who pays the players? The league does, the owners will pay an ownership fee to the league, consisting of their previous year's costs in salary and the league will write the checks (just for this year) to the players.

What about a trophy? Think of this as the year without a Santa Clause. Santa isnt coming down that chimney, but we can work with what we have. Make it the "Lock-out" trophy, something that resembles those high school combination locks. To remind the League and players , that when you get greedy, your reward is some crappy trophy that middle school student could have made.

This idea seems crazy, but to a statistician so does a 66 game season. To me, playing a 66 game season is like trying to drive 82 miles an hour down a highway, and oh yea, its snowing. You are putting the players at risk, the league at risk, and trying to push a bad product down our throats because ya'll couldn't agree over pretzels or potato chips. So why dont you chalk up your losses and try something new, have this Fantasy style season, where you mix and match and get to the heart of the sport instead of the revenue.

Thanks for Reading, and have a Happy Thanksgiving!
Posted by Unknown at 9:24 AM No comments:

Complain , but Stats dont see it

Since the NBA is on a lock out, ESPN has decided to go into hibernation, but I wont let that stop PatchStats. It has been a wild month, working on publications, and assisting the Saberphere on matters. However, we are back to the grind giving you a new look and reason to things.

It has been a long held belief that in sports, playing back to back games leaves a huge disadvantage for the team playing the back-to-back game. This past month I watched the Maple Leafs and Capitals both drop games on back-to-back days. The theory carries heavy in the NBA, where teams typically travel very far for one game, then off to another city for the next game. A lot of the scheduling has to do with revenue. Teams would love to get Friday,Saturday and Sunday games since they produce the highest attendance, aka Cash Money. But players cant do this, because for now, they are just humans. Disgruntled fans, and some coaches, have complained when they get a schedule with back-to-back games, as it is almost assumed the second game is a loss. However, thoughts are not numbers, and on this blog we use numbers to make conclusions.

In 2010-2011, 9 teams had a higher winning percentage on back to back games. [Canucks,Senators,Bruins,Blue Jackets,Penguins,Blackhawks,Rangers and Blues], of those 9 teams, only two of them did not make the play-offs. So most teams, had a worse winning record when playing back-to-back. However the true question is, how big is this difference, is one game, or 10, these things matter in sports. The thing is, the difference between regular season winning percentage and back-to-back games was on average only .08. Most teams only play about 1 out of every 5 games on a back-to-back schedule, the team with the highest percentage was Buffalo who played 27% of their games after a prior game.

This is your Statistician Speaking : Here is the testing done to show it has little effect

Ho : The Difference between Back-to-Back games and Regular Season Record  = 0
Ha : There is some difference
T = .09/.07
T = 1.37
Thus, we conclude that there is no difference in the result of the game due to playing a game the day before.

There is some evidence, but not very strong evidence. Still, people will complain, and every loss will be because "We played the day before" 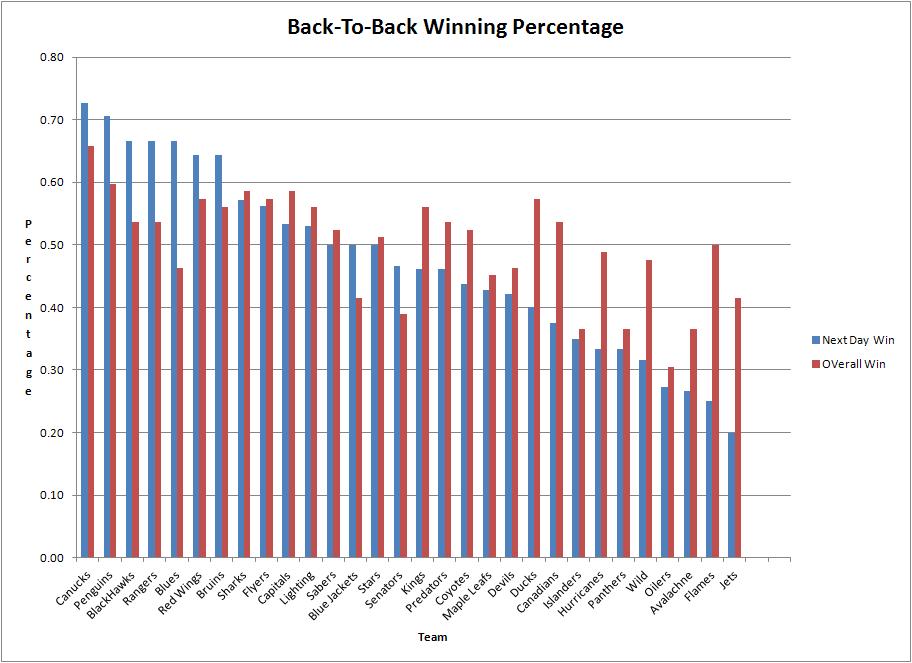 For now, keep those skates moving, because points are points.
Posted by Unknown at 12:31 PM 2 comments: