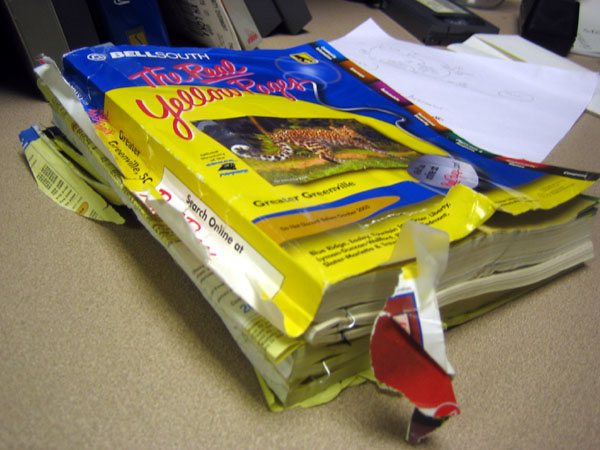 So to better understand this story, I’ll have to give you a little more background about the character named IT guy. He is in his mid thirties and full of voice. By that I mean, he doesn’t understand what an inside voice really is. This can be explained by his once ended Football career (knee injury), then transformed into a know it all football coach (but not really), and then after being fired for several losing seasons, he studied IT. He once yelled at someone on the phone with the words, and I quote “I will throw a phonebook at you, seriously a phonebook”. Some questions I had for him, where the hell was he going to find a phonebook, I thought those were like the Sears Catalog, dead in the 90’s. I also wanted to ask him, out of all things to throw… why a phonebook. Now that you got some knowledge on the character I will explain the story.

I was at work, doing my normal worky stuff. Here comes some high official who is having computer problems. Apparently he acquired a pretty bad virus over the weekend. Well the IT guy is thrown back, because he invested in the best anti-virus software out there, so it’s very unlikely that some virus got through. But he took a look at it and decided it needed a reboot. After the guy told him that it wouldn’t work, and that the computer had serious problems he continued to demand a reboot. Now my question to him is what the hell does a reboot do that magically fixes things. It’s not a reformat (which starts your computer from scratch), but rather just gives you a new set of downs, or a new inning. It really just starts from where you left off, so I doubt a reboot would “kill” the virus. Now he insisted that it needed a reboot, and refused to look at the computer until the reboot occurred. My solution to the company. If all of our IT problems can be solved with a reboot, why don’t we fired the “football” coach, and forward all of his calls to me , which I will pick up the phone and declare a reboot is needed. Because the Reboot is the Witch Doctor of the IT world. No one really knows why (or how) it fixes things, but it always does, always makes the computer (or phone) faster. So no need for IT Hogwarts, just say reboot.

I disagree with the decision; the man had his opinions and made them. This reminds me of early 1700 England, where if one disagreed with the king you were killed. The general is notorious for making the new plans in Afganistan his, and well frankly it’s a mess over there and someone needs to figure it out. I believe that Obama cleared his way to ending this war (for the better or for the worse). He knew with a McCrystal he couldn’t dictate the policy, something Obama takes pride in. I think it’s a bit harsh to kick someone out of their duties because they disagree with the President. If he had created a huge mess in Afghanistan it would be something else, but he had America on a better track. If this guy has any luck like Pittsburgh Perogie http://bleacherreport.com/articles/408974-pirate-pierogie-fired-due-to-facebook-comment , he just has to wait this thing out. But I’m selling the decision, because I think it was a dumb move.

I call this a trade because I think it could have some value, but I’m not willing to take the risk on it, but apparently a federal judge is willing to take risk. Now the Oil Spill of 2010 was something amazing, and its way too early to start yelling drill baby drill, despite thinking we should. I think the issue will create a lot of flip-floppers who debate help in the Gulf, but resort to drilling. What would I trade it for? Easy, something dealing with Alternative fuels, to be honest, I could care less about the environment (I actually save my 5 cents to buy tires to burn in the Potomac, of course im kidding). But I believe in a earned balanced market, meaning a good consumer never lets one company, or market dominate their pocketbook.

Sell/Trade – Sell and Sell high! The Americans, won with literally seconds away from their flight back. Fluff those pillows and get some rest because Saturday is the next nail bitter for the cane walking Americans. I say sell because America (somehow) won group C, despite being seconds away from losing. That means every American thinks we are awesome, and actually stand a chance of winning the World Cup, sorry America, reality will set in. America still is unlikey to win this thing, but coming off a win, its always smart to sell.
Entertainment

Mylie Cyrus
SELL!! The World is utterly confused, is she Walt Disney Cyrus or the Lindsey Lohan Cyrus, its up in the air and the transition has been too much. The world is really wondering who she really is, so I say sell why she still has market value.
Posted by Unknown at 11:58 AM No comments:

Is Stephen Stasburg the savior of the Washington Nationals, No! But he is a start. The problem with Strasburg is that he plays for the Washington Nationals! Who have an average age of old 27.5, but look who their stars are. Pudge Rodriguez, 38, Adam the strike-out king Dunn who is 30 and Ryan Zimmerman who looks like he is 32, but is actually only 25. The problem is worse than just age for the nationals. Sure like all teams they are plagued by injury, with Scott Olsen, who almost no hit the braves, but the team lacks production when it matters. Strasburg only plays once every five days, which would get them a winning percentage of .2 assuming he wins every game, which he hasn’t thus far.
Not to take away from the Kid’s 100 mph fastball, or his crazy curve, but the kid is just that, a curveball to what the Nationals normally get. 14 strikeouts in the minor leagues against the Pittsburgh Pirates is impressive, but so are a lot of baseball stats. The Nationals need a team, not a pitcher. They did get one step closer to that with Bryce Harper, the new all star center-fielder who hits baseballs to mars .
The Stephen Strasburg lesson is nothing new to sports. Ovi – not won a Stanley cup, Lebron James – still without a Ring, the key to winning championships is getting a good team, not a good player. I will say the nats did one thing correctly, and that is that Strasburg sells tickets. Standing room only for the first time since the Senators came back to the District. The Nationals still are far away from good, 10.5 games out of first place, and dozen out of the wild car. Still have a run differential of 39, still have terrible strikeout ratios. So yes Strasburg may be a great baseball player, but without a rotation of run support its unlikely that the Nationals will see the playoffs in the next three years.
Posted by Unknown at 10:26 AM No comments: