America | Where the weak surprise

In America, the poor and the underdog are always the fan favourite. This really only happens in America. As the Atlanta Braves and Red Sox continue to ruin their play-off hopes it got me thinking about how American (and ESPN for that matter) it is.

In Europe, they have mixed systems. The Barclay's Premier League, La Liga and the Bundesliga League all work on a "best" record system. Meaning, the team that ends the season with the most amount of points wins the league. Sure, it becomes less exciting when teams like Manchester United sweep the league and just crush their way to the top. But that is the World's way. The team that fought all year, shouldn't be suppressed to have to prove they are the best in some random series at the end of the year.

The World and It's Argument :
Formula 1, European Football, Golf and Rugby all have this style of awarding a winner. The team at the end of the season with the most points wins the League. While I was in England, I would discuss with the English about this. They always had solid arguments for this method. Think about if Aaron Rodgers got a concussion the last week of the season, and lets say the team had the most amount of points. Is it fair that the packers, who clearly showed they were the best should not be awarded the Super Bowl. The argument works really well in baseball where the sample size of games in much larger (162). The Phillies who are likely to go to the World Series should at least be given a direct path there. Instead, their very successful season will be tested unnecessarily against some random events. Randomness could kill a season, where the Phillies who have less likely Randomly got the most amount of points.

But this is America, and we love hope:
That is right, this is America, and like our founding, we want the small dog to overcome the evil empire [The British]. We want the Phillies to be upset by the struggling Braves, or to have the Tamp Bay Rays win on the final day of the season and make their way to the World Series where they win for the small town that barely has actual fans. This is something greater than sports!

The NHL and the NBA (assuming it isnt locked out forever) do not have wildcards per say. Instead, 8 teams from the league make the playoffs. Then they continue to play 7 game series for 4 series, making the playoffs boring long. 8/15 teams make the playoffs in both leagues, thats more than 50% of the league. It almost makes one wonder why a team would try for so long. A good example of this is the Washington Capitals. They get a lot of heat for being in the southeastern division, one of the weaker divisions, but continue to produce 100+ point seasons, quite the impressive feat. However, they haven't been to a Stanley Cup in years, in fact its been since 1998., yet  they finished first in the league 4 years in a row. Shouldn't they be rewarded for this?

What Does Australia have anything to do with this?
The Australians may be up to something here. A friend of mine brought this up to me when were discussing this exact topic. In Australian, the better teams do have an advantage in the playoff structure. The first round works a lot like the American Structure. 1vs8 2vs7 3vs6 4vs5 : Standard. But what is interesting is the second round. All winning teams advance, but the two teams with the higher seed get a bye week, and the two teams with the lower seed of the losing side are eliminated. So for example, lets say the winners are 8,2,6,4 thus the losers are 1,7,3,5. So 2,4 would get the bye week, while 1 and 3 would get another chance to win. They are being rewarded somewhat for their season long success, but still have to win some important games.

Baseball :
If  baseball does add teams to its post season play, i would like to see them try this system. It would be unique. I would like to see good teams be rewarded for having a season long of success, instead of losing to a fluke home-run, or having a pitcher injured for a game.
Posted by Unknown at 10:36 AM 1 comment:

Now sabermetricans have perfected the equation, and realized that actual exponent should be around 1.86. There are many sabermetric articles about how well this is at calibrating the win expectation of a baseball team. Some teams are really good at beating the odds, meaning they win more games than their expected wins. In 2011,The San Francisco Gaints are the best team at this, they have won 6 more games than their expected winning percentage would say. Now all of this has been examined, so what does this really mean, why I am blogging about this. That is because, what if we borrowed this idea for other sports. Could we predict the winning percentage of your favorite football team?

Using a similar equation, but with Points For and Points against, allow us to start :

[Points for]^2/ ([Points For]^2 + [Points against]^2) .
Now if we optimize the Standard Error equation, being [Expected Winning - Actual winning]^2 . Our goal is to make the sum of those numbers the lowest, by adjusting the Expected winning number. And of course, the only thing that isnt constant is the exponent value. So if we optimize that, we should aquire the value of 2.50 .

So using the last 51 years of NFL data, a teams overall record can be determined by using the above equation. 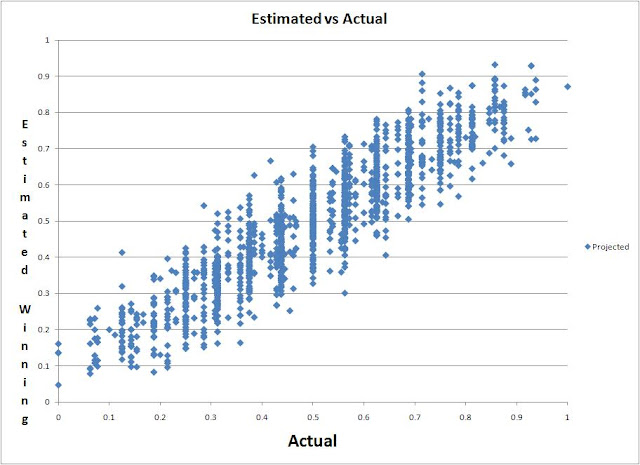 This is a plot of all the data. As we would expect, it is very close to a straight line. That means that, our Estimated winning percentage is very close (in error) to the Actual winning percentage. There are a few minor flaws. The projection will rarely give a 0-16 season, but teams actually do that. But as you can see, the projection only predicted they would win 10% of their games, so still a small margin.

So what, why does this matter you may ask.  How does this equation effect anything. It actually means a lot As I continue to examine predictors and estimates, we now can value a teams outcome. If we can predict (with in a certain error) a team's Points For, and a team's Points Against, we could predict how many games the team is going to win that season.

Now if we can use points to get wins, we could other stats to get points. How many points is a particular position responsible for, so if we add Quarterback B, who is expected to throw X amount of yards, we can contribute his X yards to Y wins. Almost in a linear fashion. So as I continue to expand the Football statistics I will refer to this expected winning ratio.
Posted by Unknown at 7:59 AM 1 comment: