Why I hate European Football, and not why you think.

I HATE European football, and probably for all the wrong reasons. European football is one of the least stat-minded games. It is not because statistics are not present in the game, in fact the sport has an abundance of statistics, the problem is no one truly cares about them. Europeans believe that football is truly a team sport and statistics are useless. I argue the opposite, the only problem is, well... there arent records to demonstrate why statistics are important. Now by my previous statement, I imply their are hidden statistics in the game, but no team (or sports site) is recording this data. Below I break-down why this dumb, and some statistics I would suggest adding to the sport.

Money
The average English Premier League player makes £1,670,000 ($2,733,000.00). Think about making an investment that large and not looking into their performance.There are few companies that are willing to invest that kind of money based on "looks" rather than a statistically backed evidence. Most teams and scouts in modern sports quantify something about a player, because in the information age, we want data, not words. There isn't an EPL combine, or a Players skill test. The lost money is a shame to be honest. I am almost certain that you could walk into Liverpool,Chelsea,Man U and ask why is [insert expensive player] paid that much? Almost surely will they respond, his [unquantifiable] results on the pitch. 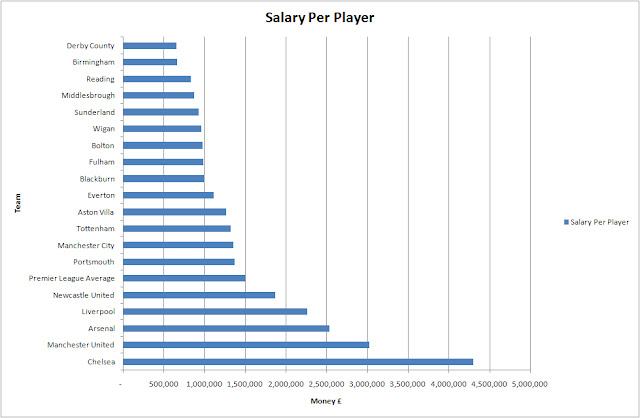 Stat-line
Before Sabermetricans, the baseball statistics had some logical use. The batting average (despite its emptiness) still made sense, if player X bats 100 times, we would expect him to hit 33 times. Here is the stat line for an average football player (imagine if they made soccer cards like they made baseball cards)
SH = Shot Total
SG = Shots on Goal
G = Goals
OF = Offsides
FD = Fouls Drawn
FC = Fouls Committed
SV = Saves
YC = Yellow Cards
RC = Red Cards

A seven year old- watching the game could have come up with those statistics. Come on people, we have advanced beyond that! Here is an average hockey stat-line (with sabermetric-esc stats)

EV = Even Strength Goals
PP = Power Play Goals
SH = Short Handed Goals
GW = Game Winning Goal
S = Shots
S% = Shooting Percentage
TOI = Time on Ice
ATOI = Average Time on Ice
OPS = Offensive Points Shared
DPS = Defensive Points Shared
PS = Points Shared
Now these are just the basic free statistics.  Here would be just a few i would add to the stat-line of an average football player
TOP = Time on Pitch
P% = Passing Percentage
GA = Give Aways
TK = Take Aways
TOOS = Time on Opponents Side (Mainly for defenders)
BA = Breakaways
S% = Shooting Percentage
+/- = Plus Minus
FS = Forced Shots - A defensive player that forces a player to make a bad shot by angling them away from the goal
PG[E] = Penalties Given [Earned] - The earned portion is for a good reason, i.e a handball with five minutes left in and empty net aka. Luis Suarez's Handball
SP% = Set Play percentage. Now i admit, this is probably one of the weakest statistics, but it is a start. It is the percentage of set-plays where a team had the favouring result. As in it reached a member of his team, or a goal is scored.
ST% = Slide Tackle Percentage (Tackles won/ Total Slide Tackles)
T% = Tackle percentage (Tackles Won/ Tackles Taken)
Why I'm so mad:
The Reason it bugs me is that it appears as though no one cares! Not a single person states reasons why Fernando Torress has suffered over the past year. People use these Qualitative things like, He doesn't have form, he "lost his step". What does that even mean, sure i lose a step from time to time, but sadly I am not costing a team £50 million. No one mentions his Fouls Drawn have increased, showing a slower more desperate player, also his OF have increased over the past three seasons because he cant get his timing right. The biggest thing is his TOP,TOOS and shooting percentage are all down. This is what separates Soccer from really the rest of (American Sports). All major American team sports have some form of minors, whether its MLB, NFL (College),NBA (College),NHL(College/AHL). This hurts soccer. They have the "Reserves, or the Academy", but rarely do players advance from them. They rather pay a lot of money for a player that is "looking" good currently. Without statistics one can not project how well a person is going to do. Besides thinking that Fernando Torres was going to implode, we have little evidence to predict it.
Statistics are driven by data, and without data its tough to gauge what will occur. So for now, and probably for quite some time, there will be overpaid football players who look good, or lost their step, but one day a small Queens Park Rangers, or Bolton will find that group of players who learn to take a walk, or pass at a good ration. Until that day, I will continue to hate European football, and im sure they would say , it was for all the wrong reasons.
Posted by Unknown at 10:56 AM