I am in the works of creating some new edge statistics that take a look at a Quarterback's rating on the field. Sure the offensive line has a large part to do with the Quarterback's performance, along with the running back. However, the Quarterback often receives more credit than he deserves. That brings me to the broken statistic, Yards.

A Quarterback often tosses guns the ball to a wide receiver who somehow catches the ball and runs down the field. Now the Quarterback is given the Yards statistic if the player catches the ball and continues to run. The statistic is really inaccurate. The Quarterback is not helping the wide receiver run down the field, but is given the credit as though he did. Now there are two sides to this argument. One is that the Quarterback looks for the best option when passing the ball. He looks for the best receiver that will cash him out the most amount of yards, and thus selects the most profitable receiver. Think about it this way, a Quarterback selects a stock (hopefully not in this economy) and hopes that it pays off more money(yards) than he paid for it(yards thrown). The findings are actually really cool. You can predict how many yards a quarter will receive by his receivers alone. With that, you can can see which Quarterback is the most profitable. Now the statistics are somewhat granulated, because there is no way to find out which yards a receiver caught with a particular Quarterback, but one can do this on the team level. A graph below demonstrates the teams Profit Rates. 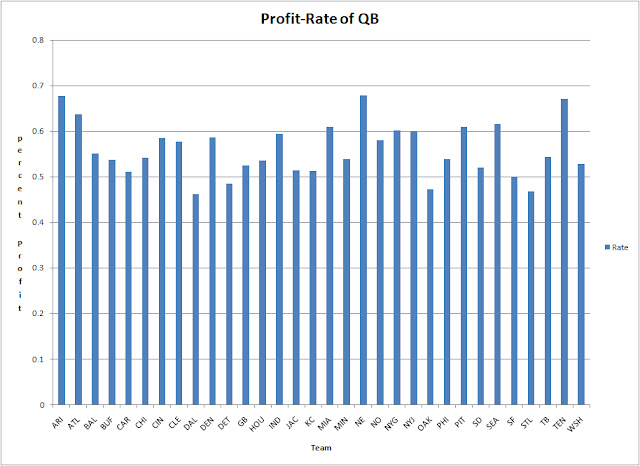 So what does this Patchstat - Profit Rate mean. What it calculates is really two things. The first is how many yards is the Quarterback actually throwing the ball, the raw value of yards. The second is how much is he being rewarded for choosing that particular receiver. A higher profit rate means two things, #1 the quarterback is smart and choosing the receiver that will get him a lot more yards, #2 is that the receivers are helping the Quarterback get more yards. Since a lot of what the Quarterback is doing depends on the receiver, you cant put full responsibility on the Quarterback, but you can make an assessment of how he chooses his receivers. Dallas had the lowest profit rate! Meaning the Cowboys do not earn additional yards after the throw. And New England had the highest, see the chart below.

All in All, the Quarterback gets a lot of "free" yards, and this will hopefully give us a better understanding of a Quarterbacks's ability.

And just for the Record, Michael Vick has a profit rate of 54%, which means he doesn't always pick the most profitable receiver.

Please add apostrophes to your tagline.