Nationals : Guess What, they are not better

Hi Readers, I may have a Washington Nationals bias, and being such I will continue to write about them until something more exciting comes up. Most of my news in the morning is about the terrible Washington based sports teams, not excluding the Washington Capitals, who fail to execute in the playoffs.
With this in mind, the buzz in DC is about HOW GREAT THOSE Nationals are!!! Guess what fokes, they are shockingly only a whole six games better than last year at this point. This change of pace season, the big spending of Jason Werth (more to come) has all come-to-forwishen for a whole measly 6 games.
The Numbers
The Nationals have scored less runs than last year. 18 less runs have been scored. So while they have acquired a very very expensive free agent Jason Werth (7 yrs 126 m.), they are not scoring more runs. 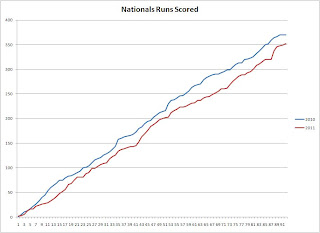 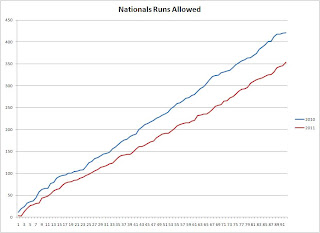 Problems to solve:
Jason Werth : Not exactly worth it. He is batting .215, when he has a career average of .265. His on-base is not any better, .319 vs his career average of .361. Well he is driving runs in, and has power doesn't he? His Slugging Percentage has dropped as well, when he was with Philadelphia his numbers were .506 and .362 with the Nationals. His RBI's are down as well! In Philadelphia he hit .544 RBI's per game, while now he is hitting .352 per game. [Just an FYI what this means, is that over 10 games in Philadelphia he would have hit about 5 RBI's and now he hits about 3]. The ironic part, is that everyone praises how good he is. The only thing he improved on was stealing. He is averaging more steals.
Catcher: The Nationals need a catcher. Ramos is below average for catchers in every category. Ivan Rodriguez is going to retire soon (as he should), and they will be left with nothing. Their next best catcher, Jesus Flores, who hit .234 in the MINORS! For those not aware, that is pretty bad. There only hope is a second-stringer named Jhonatan Solano who hit .316 in the minors. Moral of the story, this position is thin and is going to get thinner.
Bryce Harper: Will solve a majority of their outfield issues, but still has a few years to go. Personally I'm not a fan of the kid, but hey, who doesnt love homeruns!
And Finally, a graph of this years wins and last year's wins just incase you didnt believe me. 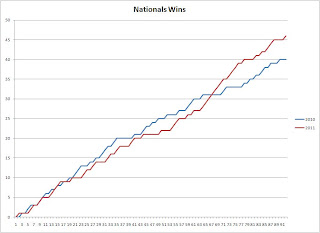 Do you think that Werth's lower stats with the Nats could be attributed to the talent of the batters around him? It is easier to pitch around or attack a batter if there is a lower level of talent around him. You don't have to worry about base runners as often and you can always take the option of intentionally walking him when not confident in the pitcher's ability.

NC33, i would like to first thank you for reading.

NC33 you make a valid point. But there is one thing I wrote about that would mention this, his on base percentage is lower, and he isn't walking any more. He is actually walking less than he did last year (.54 walks per game as now its .51). He also is walking at a 11.8% where last year it was 12.5%. What is more astonishing is his batting average of balls in play. What that means, is that for every ball he hits in play, he is only reaching base .258 , with the Phillies it was .356.