No, this post is NOT about how the Washintion Nationals blow 8 run leads but rather a question I was thinking over the past few weeks. After watching a Braves Game at 1:00pm, I saw a rather small crowd (Apparently 21,000) at the game. So I started to wonder, does the whole Day game thing really work, or are teams losing potential profit by having their games at night. Below is a graph I made up, with the time of the game, and the attendance there. This is for the 2010 season, and I only did 5 teams, because trust me this takes some time. As one can see, there really isn't a difference. The Braves are the only team appear to have a difference. Being such, I ran some fantsy statistical tests (a Two-Sample T Test for all you nerds out there), and found that there wasn't a difference between the two. Well, how about the Nationals, they appear to have a huge dip between day and night games right. All those hard working politicians dont see the games at night right? Nope, there is not statistical difference between the attendance of a day game and a night game. They on average receive roughly the same number of people.
Overall, there is no difference between a teams Day Attendance, and Its Night Attendance! 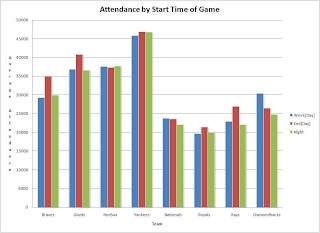