Harry Potter has begun its final decent into the Hollywood Hall of Fame. Assuming it doesn't pull a Brett Favre and come out of retirement 3 times, one can assume that Harry Potter and The Deathly Hollows Part 2 is the final film to this saga. Not only did the film touch endless numbers of children and adults; it also merged great stars while forming new ones. Just think about the Lottery that Daniel Radcliffe, Emma Watson and Rubert Grint (thats Ron Weasley if you didn't know) hit when they were drafted for this film. Not just with money, as i am sure there was a lot of that, but just their pictures sitting on millions of desktops, and all over the walls of readers. This blog though is about numbers (or rather statistics), and anyone can read US Weekly (just for the record, that is not a credible source of information) if they wanted to know how the Harry Potter Characters were going to live. As I sat through the final (touching have you) moments of the final film, I realized my childhood was over. I'll try to breakdown some cool facts and figures, as well a give respect to how well the franchise did.

If you love harry Potter, and maxed out the above, you spent $500 dollars on Harry Potter, that is an average of $35 dollars per year.

Movies - Sure no Oscars, Golden Globes, but money talks.
This past weekend Deathly Hollows became the number 1 Opening Box Office film by $10,138,517. Just for perspective, when #2 past #3, it only did it by $6,000,000. The Deathly Hollows Part II is on pace to become the highest grossing movie of all time.

Based on Opening weekend ALONE, Harry Potter DH 2 goes down as the 168th highest grossing movie of all time. That is, if the movie never sold another ticket, and only showed on 4 days, it is 168th of ALL TIME!

Its more than the finale though,sure once you are hooked on Harry Potter, its a like a drug you can put down. 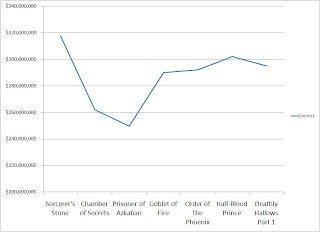 Every Harry Potter Movie (minus Deathly Hollows Part 2) is in the top 75 of all time sales.  Think about that, thats like saying the 7 out of the top 75 (all time) baseball players came from the same team. The trick here is that there were seven movies.  Although the franchise is successful, it still has its faults.

Below is the series combined total. Think of this as Golf, the lower the number the better.

So although the Harry Potter movies have grossed a lot of movie, and began a legacy, it did so with a consistent stream, not a Babe Ruth All-Star.That is the key about this series, it bought us for the long term. It convinced us to keep going through 10 years, that this was something worth waiting for. Most of the movies in that list above came out within 5 years of each other, we didnt have to wait long for the ending.

If Harry Potter wants to become the best franchise movies, it needs Deathly Hollows Part II to do well, and just not good, but excellent. It needs to become the Avatar of 2011; despite the 3d technology i dont think it will do it. It has $591,957,625 more to go, which seems like a lot, but the movie isnt closing tomorrow (well hopefully anyway).

The irony of Harry Potter, people wait in line until 12am on the night before to be the first to watch this movie. The top five films (grossing all time) did not have people waiting in line. People didn't wait in line for Avatar, they didn't have someone scout out seats 4 hours before hand. In fact, Avatar's opening weekend was half  that of Deathly Hollows Part II and Part I; but movie box offices are not a sprint, they are marathon. Harry Potter probably wont convince people to go back several times, or will its amazing 3d images convince critics that needs to win an award (despite being a rip of a movie called Ferngully).

Despite the statistics, the movie is amazing, and it has surely touched more hearts than any Statistician could count, it made people lose hours of sleep reading those books, or millions of costume sales and lighting bolt tattoos.
Posted by Unknown at 10:13 AM