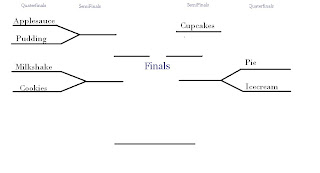 Applesauce quoted on the Victory " We made it out of the Quaterfinals, but making it out of the Semi Final will be a bit harder. We have two tough competitor(s), either Cookies, which are strong on their easy to bake scale, and Milkshakes which are a better give and go. This is gonna be a tough Round."
Posted by Unknown at 8:46 PM

Patchus, I think that Ice Cream would trump everyone in this tourney. But lets think about this some more, what if a certain coach Ditka could compete? The battle between Ice Cream and Ditka would be intense!