It goes without saying, but Liverpool have been all but a success a this year. As my beloved Reds sit in 7th, behind Everyone, Arsenal,Tottenham,Chelsea,Man City and Man United, all of which have a game in hand. Most fans would agree that Liverpool are 'playing' better, but subjective words always sound good because we can grasp on them with hope instead of having our dreams crushed by some matter of fact number. The question really is; are Liverpool actually doing better.

On the same day last year, Liverpool had played a total of 34 games, this year that total was 43. To say that Liverpool needed a striker was an underestimate. Liverpool's attack ranked 11th last season, and so far this year they are 5th, while their defense ranked 3rd and now ranks 8th. So although the 'Possession' style football may have increased the total number of goals, it seems to be leaving a lot more holes in the back. This is quite surprising, since Skrtle and Agger are some of the best top class strikers in the world.

Liverpool seem to fall apart in the second half. If the game only consisted of 45 minutes, Liverpool would rank 4th in the league. They also fail to recover from a goal; when Liverpool's opponents scores first they average only .6 points from those matches (1 win 3 draws 6 loses).

Liverpool scores there goals in the latter half of the game. There peak goal proportions is around the 60th. What is also interesting is Liverpool's inability to score a late goal. 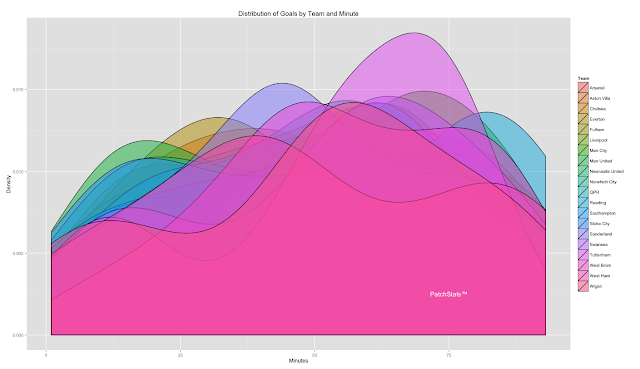 Daniel Sturridge has scored the 3rd amount of goals in 5 games with Liverpool. His four goals puts him behind Suarez (18) and Gerrard(7) but with not nearly the amount of games. Liverpool received more goals, but more goal scorers.  Suarez only trails Robin Van Persie for the Golden Boot (and he only trails by one goal). Sturridge definitely helped this, during the barrage against Swansea Sturridge created a lot of chances.

So a year later, and Liverpool are in the same ranks. I've lived by an old saying 'If you aren't getting better you are only getting worse'. Its true for Liverpool as well. The 'hope' began to show its true head, and it does not look great for Liverpool.

Failing
JonJo Shelvey has failed to produce. An I'll be honest, I never really thought he would. If it was not for the show 'Being Liverpool' I would have never expected Brendan Rodgers to select the young lad. In prior years he was always way to eager to take a shot. He has terrible ball handling skills, which is very uncharacteristic of a Rodgers player.
Raheem Sterling had the world on his shoulders and stood tall, but never threw the world off.  He simply played to get the minutes, or so it appeared. He always played it safe, never going for an aggressive run to score, or to prove himself. At the same token he never really made a massive mistake.

Passing
Jordan Henderson looks great on the pitch. He moves the ball well, and a has a solid shot. He looks like a future liverpool star.
Stewart Downing never deserved the hate. He may not be the goal scorer most people expected him to be. However, Downing holds the ball well and leads for a lot of set ups. He should be able to continue to be a star.
Posted by Unknown at 7:51 PM