The Lottery : Waste of Time

I've been known to hate  not like a lot of things in my days, but i truly hate the lottery. The old building I use to work in had a small mom and pop shop where a lot of people lined up for lottery tickets. When I first started I use to think I was in Soviet Russia waiting for bread, but then i realized it was worse. People were waiting in line in the hopes that this capitalist market would allow them to become a rich citizen. Don't get me wrong, I love a nice rags to riches (hence my love for the films Blank Check and Pretty Women). Lottery is Italian for "your screwed", ok that's not factually correct, but it is surprisingly close. Just because the pay-out is higher, does not mean your odds increase. I also want to be frank, the people that just started playing, what is the difference between 10 million (the lowest amount). Sure, it would be cool to have a plaque on your wall saying "I won the world's richest lottery". But in reality, we are not really going to be able to tell the difference between $10 million and $640 million, but now that it is so high, everyone has to play.

Its more than just the odds that make me hate the lottery, its really the entire thing. Picking your favourite cats foot number, throwing darts at the stock page, picking numbers because you had 13 single dollars in your pocket. All of these lead to people to believe that that they will the Jackpot.  I'll do my best to describe some neat things about ways to make money and how to lose it quickly. The first set of graphs are the odds of winning the lottery. If the background is red, the machine hit at least once, and  if there are multiple white spots, it means that how many times you hit. I also put a graph in to show you how many times i hit at each money level. I also "played" the lottery 1,755,625 times. (Its the maximum size allowed by PC). A quick sidebar on this issue. When I learn a computer program langauge, I try to solve everyday problems using the computer. When I learned R, my first program simulated the lottery. I had a where clause, where the computer would keep drawing until it hit the lottery; needless to say, my computer crashed and it was tough explaining it to IT why this happened. 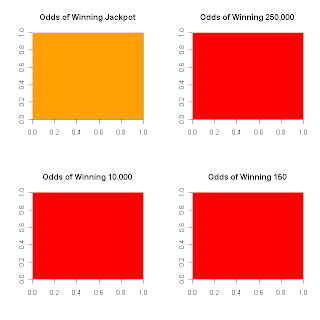 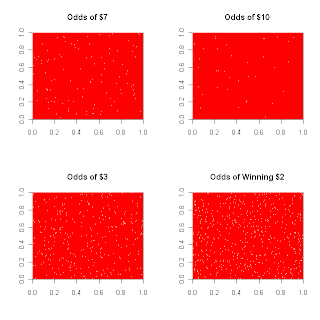 As you can see by both the table and the graphs, not a lot of people are going to win this weekend.But I'm sure those people who bought tickets are like "But it only takes 1 ticket to win, and I'm going to win". I say that every time I approach an attractive celebrity, it only takes one hello for her to go home with. Needless to say, im 0/100 on Rachel McAdams (one day though one day though). A little bit ago I saw the film "Hes just not that into you" featuring a list of somewhat famous actors and actresses. The main thing I learned was that you need to act as the rule, and not the exception. If i went around thinking everything was going to go my way all the time, then i wouldn't be blogging! Lets just admit it folks, the lottery just not that into you, so don't expect it to call you back tomorrow morning. Nor can you call it, because you have the wrong numbers.

I'm sure a bunch of you are thinking , Listen PatchStats, its only (insert any value you spent on the lottery), I think I can live without this money. Below is barchart of playing the lottery. The first bar is what you can expect from winning the lottery. (Probability*Value) for all possible outcomes. As for keeping the money in your pocket, thats the second bar. 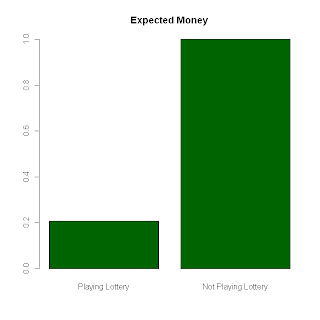 . Lets think about if we kept that dollar, what  could we do. You could tip your waiter/waitress more, you could eat a McDouble (which for some reason is cheaper than both a hamburger and cheese burger, despite having more of both), a Taco Hard Taco (for reason the soft onse are 1.19, damn you for knowing your market). You can even out on LivingSocial for $1. I did a quick search on craiglist to see what i could find for $1, apparently you can get Capitals Tickets  [wow have the capitals really stunk this year]. A new pair of trainers , and even a smart car and thirty minutes of driving credit. [ok that last one was free, but hey you get my point.] So basically, you are screwed, its like that scene in titanic, where rose doesn't hold on to jack's hand, except this time Rose threw Jack off the top of the boat with a lead weight tied around his leg. All gambling kinda sucks though, to reach the Mega-million dollar amount, it would take an estimate 25 million hands of BlackJack, assuming you played fairly and smart and won .495% of the time. That would take somewhere around 289 days to win, assuming you played 1 hand per second (which of course is not likely, but neither is winning the lottery). So the next time you debate getting that Guacamole that is that extra $1.00, just say "Yes, At least I didnt play the lottery".
Posted by Unknown at 1:43 PM

Straight from an economics textbook:":A firm should produce output when the marginal benefit of doing so equals or exceeds the marginal cost." As far as the lottery is concerned, the marginal cost is the $1 spent on the lottery ticket. The marginal benefit, even if the expected outcome of the ticket is $0.2, a player derives an additional benefit just by playing the lottery. For many, being part of this historic event is of a value greater than $0.8 (just think how many times you could tell Granny with Alzheimers that you played the lottery!). If that is so, which I suspect it is in almost every case, then it makes sense to play the lottery.

What's so bad about allowing people to dream a dream, even when it's complete bollocks? I'm pretty sure the majority of people who do play lottery expect NOT to win. However, dreaming that dream for one second gives them reprieve from a life that they perhaps are not completely satisfied with, and as Mr Guinn alluded to, dreaming CAN be worth that $0.8 to a lot of people.

After Posting this, I had a conversation about this with a couple of friends. I would agree with allowing people the hope to win, but I wouldnt say most people expect to lose. Think of it that way. People may expect not to win, but what if people went in with the expectation of loss. I bet if we asked people in line if they expected to lose, they would say no, but if we asked if they expected to win, they would also say no; but aren't they the same thing?

As for both your remarks I agree. What I should have written was, the cost of one additional ticket. Sure one ticket is fine, it takes 1 ticket to win. The marginal cost (utility included) of an extra ticket is so small its not worth grabbing an extra ticket or two. Your odds change slightly with even 100 tickets.

I love both your comments, and keep them coming.

yea im with you on that, the marginal utility of purchasing that extra ticket is practically nothing. however, even though the odds might still be insignificant with a 2nd purchase, surely the chances of you winning have just doubled.

Great blog. All posts have something to learn. Your work is very good and i appreciate you and hopping for some more informative posts.
mơ thấy người chết đánh con gì