BCS Standoff | Who Should Play who?

Roll Tide! I have to start this post off with that, because I am about to write about why Alabama should not play LSU in the National championship. First and foremost, I respect Alabama, and I like the team. I think it would be a stretch (and bandwagonish) of me to say I'm a fan.

One Game Thats it
Alabama played LSU, you can watch clips and read about it on we hate hockey channel ESPN. The game went into overtime, and Alabama missed a field goals that could have won them the game. However, aren't all of lives just what ifs. Alabama lost, and thats all it takes to not play in the national championship. But not only that, but they lost to the team that is currently number 1. Lets assume that they do meet in the final game for the national championship, and Alabama beats LSU. So who is the national champion? Well LSU would be 11-1 with their only loss coming to Alabama, Alabama would be 11-1 with their only loss coming to LSU, it would be a draw in all sense. But wait, the national championship somehow means more than the regular season game. So LSU is forced to beat the same team twice, and their original win over Alabama really got them... a rematch, which for all intense and purposes got them nothing.

Facts : Oklahoma State DID NOT lose to LSU. So they should get a chance to, and if its a blow out, it just proves that LSU is such a great team.

Why the Playoff System would not solve this
EVERYONE wants a playoff system, expect for the people making millions of dollars of bowl games. So there really isn't a rush to change the current system, and thank god, because that would not fix the problem. There are (roughly including the Independents) 12 conferences. So it would take 4 games, which translate to 4 weeks of playoffs to get a national champion. That would be a lot of time, but so is March Madness. All the other teams would play bowl games a one and done, kinda like it is now. This is what most people agree would solve our problem of "The Bowl System isnt fair".

If we switched to this play-off style, LSU would not play Alabama. LSU would win the national championship   SEC Championship and then enter the bracket that way. So a #1 could actually not play the #2 for the National Championship.

Football is Football| Breathe and Realize
I think its safe to say, football is football and it causes the worst problems! It has a lot of heavy hitting, and a lot time to play out a play-off system. Teams cant really play more than once a week, which would draw out this play-off bracket system.

Power Conferences
No one talks about the Big East, but they are just slightly behind SEC for highest out-conference wins Average. The Football industry, selects teams it wants to play, and finds reasons not to place them into the national championship. What they should be doing is looking at data then deciding who to put in the rankings. To date, the "Computer Poll" still relies 25% of a teams human ranking. That is 1/4 random bias. Needless to say, LSU should not play Alabama in the National Championship.

This is a chart of The Average wins out-of-conference from the teams in the conference. 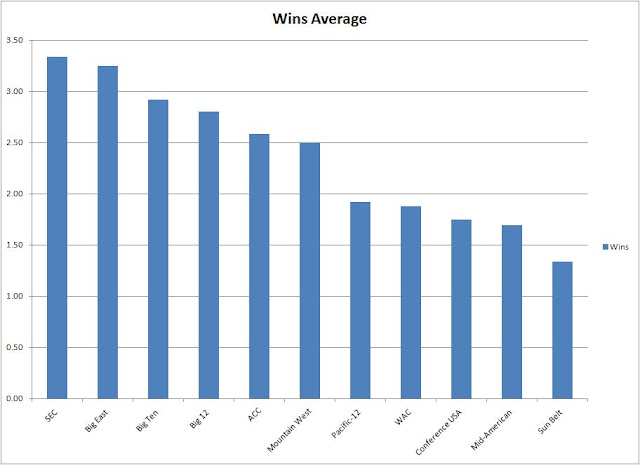