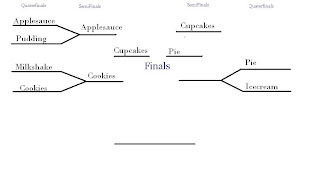 
Cast your votes via comment.
Posted by Unknown at 5:21 PM

Patchus ... Milkshakes are better than cookies first of all.

Cupcakes versus Pie ... that I don't know.

Georgetown Cupcake would defeat pie, but not Hello Cupcake.